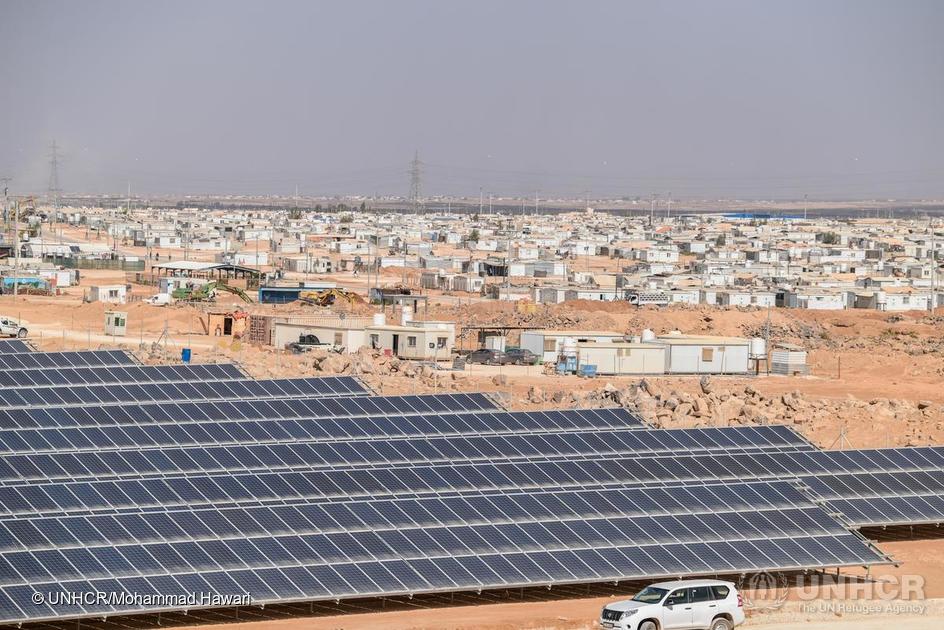 Edited from an article posted on Canadian Solar Chairman and Chief  Executive Officer Dr. Shawn Qu’s linkedin, 15th March 2018. Canadian Solar’s Founder and Chairman Dr. Shawn Qu had the opportunity to visit the Za’atari solar park in Jordan, where Canadian Solar supplied 12.9 MW of our Dymond solar modules for the largest solar plant ever built in a refugee camp. The project was commissioned in November 2017 and is now providing clean energy to 80,000 Syrian refugees living in Jordan’s Za’atari camp, called “Jordan’s youngest town.” Electricity provides an essential lifeline for camp residents, from lighting shelters to preserving food and maintaining hygiene. Previously, however, the high cost of powering the camp has meant that electricity use in refugee shelters was rationed to six to eight hours a day. The new solar plant now provides families with between 12 and 14 hours electricity each day. Residents say the extra power will vastly improve their lives, allowing them to complete their daily chores earlier and prevent children from having to play outside on the dusty streets after dark. The plant reduces the annual carbon dioxide emissions from the camp by 13,000 metric tons per year, equivalent to 30,000 barrels of oil. The 12.9 MW peak solar photovoltaic plant was funded by the Government of Germany through the KfW Development Bank at a cost of 15 million euros (US$ 17.5 million). The plant will deliver huge savings in energy bills for the UN Refugee Agency, UNHCR, which will be reinvested in other much-needed assistance. The solar plant is connected to Jordan’s national grid, meaning any unused power is fed back into the network to support the energy needs of the local community and help the country meet its renewable energy goals. The solar plant was constructed on the outskirts of the camp, consisting of 40,000 Canadian Solar Dymond panels (CS6X-P-FG 320/325W) on an area roughly the size of 33 soccer fields.