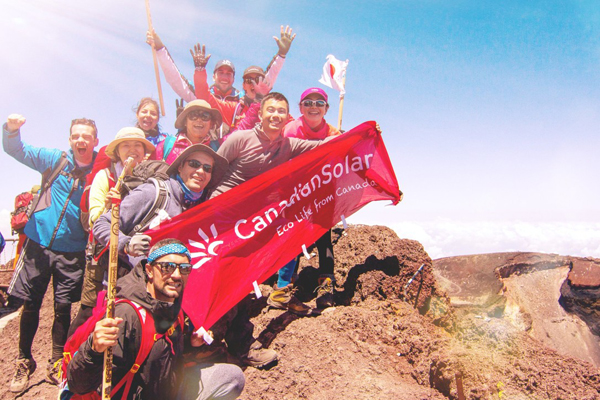 HOW WE GOT TO THE TOP OF MOUNT FUJI

In August 2016, a group of Canadian Solar employees hiked to the summit of Mount Fuji. This demonstrates the friendships formed among colleagues at Canadian Solar Japan. It also provides a unique opportunity for us to reflect on the journey that Canadian Solar has gone through to become a top-3 solar company in Japan. Japan is a very brand-loyal country, ascending its solar mountain has been a persistent journey. In 2009, long before the start of the PV rush in Japan, we set up base in Tokyo. The tsunami and resulting nuclear tragedy of 2011 stimulated Japan to implement a feed-in-tariff program for renewable energy. Due to our perennial presence in Japan, we were in the right place at the right time to support the conversion of the country from nuclear to solar. In 2015 we delivered nearly 900 MW of solar panels to Japan, taking over 10% of local market share to become the No. 1 foreign brand and the No. 3 overall. Up to Q2 2016, we have already delivered over 2,500 MW to Japan. In 2013 we expanded the scope of our business activities in Japan from purely selling solar panels to the development and construction of turn-key solar power plants. As we entered this phase of our ascent, we found our upward progress to be slower than expected. The issues in Japan were very similar to the issues that Canadian Solar had experienced when developing projects in other countries. Educating the community on solar, mitigating visual impacts and the possible impacts on wildlife were common concerns. What differed in Japan was the approach and time it took to successfully reach consensus on these issues. Canadian Solar reached commercial operation of its first Japanese project in 2014, a 1.2 MW project named “Shibushichocho”that generates approximately 1,533 MWh of clean electricity each year. The EPC team assigned to this project was comprised of both local and foreign employees pulled from Canadian Solar offices around the world. Still, our team found themselves on uneasy ground and faced challenges from performance ratio guarantees, EPC wraps and owner defined specifications with local contractors. We were able to overcome these challenges by spending countless hours working closely with the engineering and commercial teams of our Japanese construction partners. In the past two years, we have executed over 80 MW of international EPC contracts with Japanese contractors, including Toshiba and Hitachi. As a Canadian company in Japan, we also found financing to be a challenge as there were very few local lenders working with foreign sponsors. Our team managed to overcome this challenge by introducing international banks with well-established relationships with Canadian Solar. Early this year, we successfully closed our first “A” rated green bond in Japan, a first for a foreign solar project sponsor in this country, and we received preliminary credit ratings of “A” on two additional projects. Eventually, we won the trust of Japanese banks by securing a significant corporate loan from a Japanese megabank. Japan still falls short of 37 GW to reach its government’s target of installing 67 GW. Up till now, 2,500 MW of Canadian Solar modules have been delivered to Japanese customers, 22 MW of solar power plants have reached commercial operation, 120 MW of projects are currently under construction and we have a project pipeline of close to 600 MW that we are scheduled to build in Japan in the next couple of years. Japan is also my favorite country for skiing. Since ten years I spend my winter holidays there, but the mountains of Japan are actually worth visiting all year round. I’m already looking forward to joining our team in Japan on their next hike to the top of Mount Fuji. (This article was first featured as a LinkedIn post from Canadian Solar CEO Dr. Shawn Qu)